I’m really excited about the release of today’s video, but before we get into that, there is a story behind the style of my animations and why they don’t look like other well known Mograph tutorials.

If memory serves me well, it was in 2009 and I had been animating games with Flash/Adobe Animate for several years, but there was a push in the specific game industry I was in, to move over to After Effects due to the amazing effects which could be achieved. It was going to be our first game which would feature painted characters and scenes and the animation needed a sense of realism to it.

I was sent on a short course which gave me a taste of what could be achieved, but far from helped me understand how to create effects and animate on my own. I thought this was due to having a poor lecturer, but as the years ahead would prove, the courses which were taught focused primarily on animation for Ad Agency work.

This did not help me at all, I needed to figure out how this application can be used to create character animations, light rays, moving oceans, thunder clouds and fire. I started scouring the web and came across some great animators working on video special effects and this was the moment which I knew what I had to do.

I needed to learn from all the Video Special Effects as well as the Ad Agency style information I could get my hands on, and once I understood the techniques behind these animations, I could create my own style.

I hope that with this tutorial you will start to understand how to look at objects when bringing them to life and not forget about the small details which ensure that your animations will stand out among the crowd.

Oh, and if you want, grab the file below and follow along. 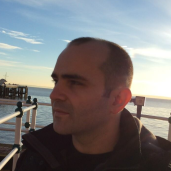 Animator, designer, blogger, YouTuber and lover of all things creative.

After Effects Essentials – The Series

After Effects – Create a Spinning Coin

Please check your email and confirm your subscription. Please note that you might need to open your junk folder and add to whitelist/set as not junk.

We use Sendinblue as our marketing platform. By Clicking below to submit this form, you acknowledge that the information you provided will be transferred to Sendinblue for processing in accordance with their terms of use.